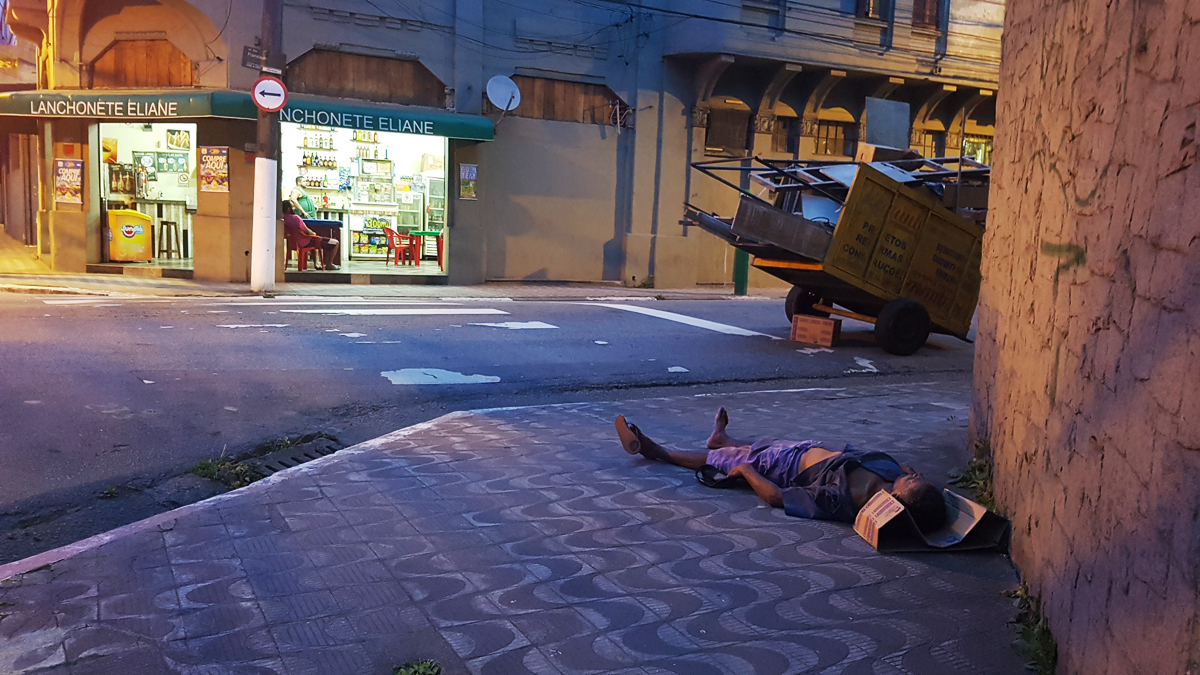 I’ve been amused over the past week at Procomum as the phrase ‘contra o trabalho’ became a meme, attached as a suffix to a range of activities. This project, which in part conducts research into arts infrastructures, places an emphasis on work. Firstly, with reference to ‘creeping authoritarianism’ the project seeks to question who or what are we working for? In this historical period of ‘late liberalism,’ as Elizabeth Povinelli [PDF] calls it, we live and work in a world which is designed to return value to an elite group of people. The project’s current context in Brazil is one in which a recently-elected far right ‘anti-communist’ government is readying to be installed. Endorsed by positive responses in financial markets and re-inforced by recursive ‘disinformation’ campaigns on Facebook and WhatsApp, it does not seem at all sociable to simply ‘go with the flow.’

Occurring regularly on a Wednesday afternoon Almoço Contra o Trabalho purposefully intervenes in the ‘regular’ working week, inviting the Procomum community to spend time socialising and experimenting with other people and species (specifically plants). In doing so we might lessen the pressure of socially-reinforced expectations and habits that bind us to systems of exploitation and alienation and rather re-kindle relationships in the world.

Of course, there is some irony to the notion of a regular working week. Institut Procomum is located in the downtown working class neighbourhood of Villa Nova. Walking the streets populated by mechanics, lanchonetes, copy stores and vacant lots, there are clearly those who are at work, those who are working on it and those who are without.

One local entrepreneur pushes a trolley of debris around the neighbourhood. Occasionally he drops his unruly load on the footpath in front of a house or business. He rings their buzzer and if someone responds he ask for two reals to clean up the mess. Why pay him? Because it’s a funny scheme? Because he’s only asking for two reals? It could be an anti-gentrification measure—as long as people keep paying him, the streets will never be totally cleaned up. In time we might learn about him, piece together his story and come to adore him—raise him to the status of local icon (or develop his character in Umbanda!). What can we learn from him? Intentional or otherwise, there is some irony that his lo-fi strategy mirrors what occurs on a much larger scale. Afterall, when industries and corporations cause ecological damage it is not unusual for these same organisations to be consulted to provide solutions? So, rather than being held accountable for the damage they have caused, they are paid to service the problems that they have engineered. Is there something community-focused arts organisations can learn from this too?

We might think of art practices as a strategy to refute or subvert work, believe in the autonomy of art or pursue activities that seek to collapse art into life. If these critiques were provocative in the post-war 20th century, what are their relevance to highly professionalised and globalised arts scenes now in which, as Hito Steyerl points out, art/work has become an occupation? Theorists such as Pascal Geilen have been critical of the artworld’s role in the development of freelance ‘creatives’, and other such precarious workers who comprise ‘creative industries’, as the ideal subjects of neoliberalised (affective) economies.

So, the question I might be getting to is about how, as arts workers, we might ‘cash in’ or somehow financialise our cultural capital and secure a means to live? Especially given the current culture wars, as Angela Nagle describes it, between the alt/neo-right and anyone who they perceive as their enemy? Travis Higgins discussed ‘platform co-operatives’ here the other night. I’ve been interested to learn more about the efforts of groups such as the Economic Space Agency to develop new ‘New Economic Space’ on blockchain-secured platforms such as Ethereum. Perhaps there is some opportunity to financialise practices of care and of fostering community that could earn returns to support these very activities? Diego reminded me this evening that when we first cooked together we talked about intention. This is probably a good place to begin.